Beer cheese originated in Kentucky, U.S.A, in the 1940’s., as a cheese spread and is now found in several regions of the United States.  Commercially produced beer cheese is usually made with a processed cheese base artificially flavored to taste like sharp cheddar. But here at Ashby Foods, our beer cheese is made with the very best ingredients and 100% real cheese. An old Kentucky family recipe means our beer cheese is not only authentic, it’s irresistible.

The popularity of beer cheese has just recently begun to skyrocket. Several popular chain restaurants are now featuring various dishes made with beer cheese, including soups, dips, and toppings. The demand for beer cheese is also increasing among consumers and in order to meet that demand, many local stores and nationally known supermarkets are selling it. It’s fitting that since beer cheese originated in Kentucky, that the Beer Cheese Festival is held every year in Winchester, Kentucky.  Over 10,000 people attend this event; Commercial and amateur beer cheese makers from around the country compete for the coveted title of “Best Beer Cheese”. In June of 2013, Ashby Foods beat all of the competition and took 1st place in the commercial division.

Ashby’s beer cheese is made with all natural, carbohydrate free cheese, and has a high concentration of essential nutrients, in particular, quality protein, calcium, vitamin D, and potassium. These nutrients help to lower your risk for osteoporosis, diabetes, heart disease and high blood pressure, as well as aid in proper muscle and nerve function, good bone strength, proper kidney function, and production of DNA. Other vitamins and minerals include riboflavin, vitamin A, vitamin B-12, phosphorus, zinc, iron, and magnesium. These vitamins and minerals aid in turning food into energy and help to promote proper functioning of your organs; as well as promote good vision, cell growth, immune function, and act as antioxidants to prevent damage to your body from free radicals. It’s difficult enough finding healthy choices for food.  And now you don’t have to use a processed cheese flavored food loaded with chemicals and preservatives for your favorite recipes. You can have the natural choice with Ashby’s beer cheese.

A Multitude of Uses

Ashby’s beer cheese can be used as a hot or cold dip for chips, crackers, and vegetables. It works great in dishes, such as macaroni & cheese and broccoli with cheese. Ashby’s beer cheese can be melted on to burgers, folded into omelets or burritos, used in soups, or used as a spread. And, it’s a great complement to your favorite wine. Also, don’t forget our spicy version for when you’re feeling a little sassy and want to spice things up a bit with some added heat.

Growing up in Kentucky, the owner remembered his mother making beer cheese from an old family recipe at Christmas and for other special occasions.

After moving to Florida in 2009 and becoming a little home-sick for good old Kentucky home-made food, he decided to try his hand at the old family recipe. He had a difficult time at first, because he wanted to use all natural ingredients, which can be hard to find. After a great deal of searching, he was able to find the finest sharp cheddar cheese to use as a base for the recipe that used all natural ingredients and was perfect for his masterpiece, which some consider to be the best tasting beer cheese on the market (2013 Champion).

It worked out well for a while, but everyone that tasted it wanted more. He enjoyed making the beer cheese, but the demand became too great. He also realized, since all of his friends and acquaintances loved it so much, that this incredibly versatile food should be in stores so that everyone had the opportunity to purchase and enjoy it.

Well, he did it. And now this old Kentucky blend of cheese and spices is available for you to enjoy. Try it once, and you’ll be hooked! 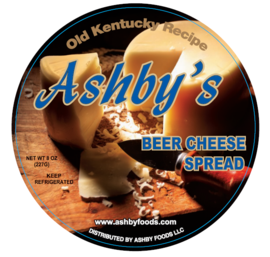